More than 9 out of 10 of the world’s smartphones run on ARM-based processors, have not really penetrated the datacentre market as Intel has lowered the energy in their CPUs.

As Microsoft has gained a lot of insight into building and managing a global, high performance, highly available, and secure network. Their experience with hundreds of datacenters and tens of thousands of switches tells them they need to:

To address these requirements, Microsoft pioneered Software for Open Networking in the Cloud (SONiC), a breakthrough for network switch operations and management and now Microsoft has open-sourced this innovation to the community, making it available on our SONiC GitHub Repository.

SONiC is a uniquely extensible platform built on the Switch Abstraction Interface (SAI), which defines a standardised API. Network hardware vendors can use it to develop innovative hardware platforms that can achieve great speeds while keeping the programming interface to ASIC (application-specific integrated circuit) consistent. Microsoft open sourced SAI in 2015. This approach enables operators to take advantage of the rapid innovation in silicon, CPU, power, port density, optics, and speed, while preserving their investment in one unified software solution across multiple platforms.

As you know, Microsoft Azure has a massive datacenter infrastructure behind them with robust and secure networks.

Microsoft’s goal is to offer cloud services that any customer, anywhere in the world doesn’t have to worry about capacity constraints or service quality and to be able to get to their resources from anywhere, at any scale, with no limitations, easily and securely.

When Microsoft started developing cloud offerings, they quickly realised that traditional networking approaches wouldn’t give the speed, reliability, and security needed by customers. Microsoft has been innovating and heavily investing in network infrastructure. 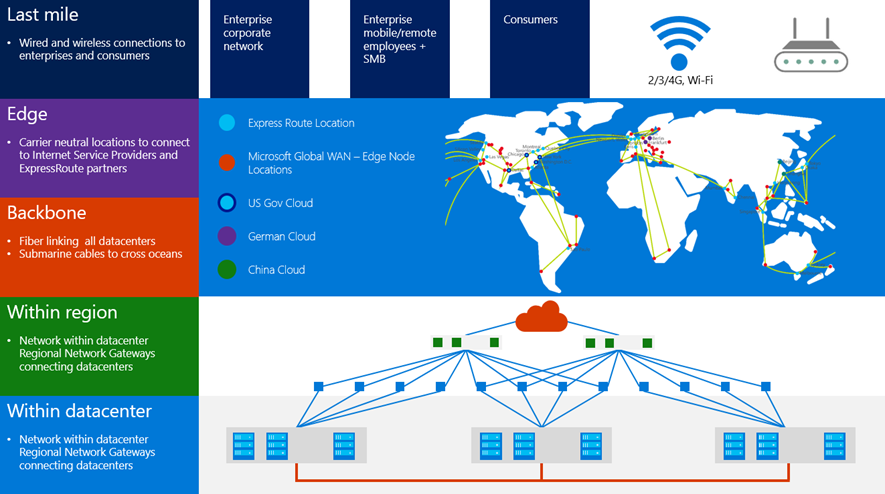 Azure VMs have up to 25 Gbps bandwidth with very low latency within each region. Servers running in Azure datacenters have special network cards (NICs) that offload network processing to the hardware. Both Linux and Windows VMs will experience these performance improvements while returning valuable CPU cycles to the application.

Microsoft has announced the preview of the latest edition of Azure SQL service tiers, Premium RS and a 4TB increase of storage limits for Premium P11 and P15.

Premium RS is designed for your IO-intensive workloads that need Premium performance but do not require the highest availability guarantees.

You can now use up to 4TB of included storage with P11 and P15 Premium databases at no additional charge.

Microsoft will be celebrating the launch of the latest version as well as 20 years of Visual Studio. There will be the team from Microsoft, Xamarin and Readify who will be sharing the latest innovations in Visual Studio, .NET, Xamarin, Azure and more. It’ll be a day packed with technical demos sessions to help you get the most out of Visual Studio 2017!

For women… This is a unique event designed to inspire and empower young women from STEM-related backgrounds (science, technology, engineering and maths). Happening on Thursday March 20, 2017, from 4:45 pm – 8:30 pm at the University of Technology Sydney, Ultimo.

In case you’re not keeping up, PowerShell v5 is included as part of Windows 10. And since PowerShell has now been open sourced, there’s now a brand new version that you can install in your computer.

There’s a whole bunch of changes and updates.